DEPO-PROVERA Sterile Aqueous Suspension contains medroxyprogesterone acetate, which is a derivative of progesterone and is active by the parenteral and oral routes of administration. It is a white to off-white, odorless crystalline powder, stable in air, melting between 200° and 210° C. It is freely soluble in chloroform, soluble in acetone and in dioxane, sparingly soluble in alcohol and methanol, slightly soluble in ether and insoluble in water.

The chemical name for medroxyprogesterone acetate is Pregn-4-ene-3, 20-dione, 17-(acetyloxy)-6-methyl-, (6α)-. The structural formula is: 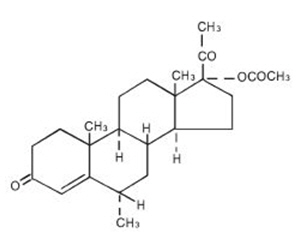 DEPO-PROVERA for intramuscular injection is available as 400 mg/mL medroxyprogesterone acetate. Each mL of the 400 mg/mL suspension contains:

When necessary, pH was adjusted with sodium hydroxide and/or hydrochloric acid.

Medroxyprogesterone acetate inhibits (in the usual dose range) the secretion of pituitary gonadotropin which, in turn, prevents follicular maturation and ovulation.

Because of its prolonged action and the resulting difficulty in predicting the time of withdrawal bleeding following injection, medroxyprogesterone acetate is not recommended in secondary amenorrhea or dysfunctional uterine bleeding. In these conditions oral therapy is recommended.

The physician should be alert to the earliest manifestations of thrombotic disorder (thrombophlebitis, cerebrovascular disorder, pulmonary embolism, and retinal thrombosis). Should any of these occur or be suspected, the drug should be discontinued immediately.

It is good medical practice for all women to have annual history and physical examinations, including women using DEPO-PROVERA Sterile Aqueous Suspension. The physical examination, however, may be deferred until after initiation of DEPO-PROVERA if requested by the woman and judged appropriate by the clinician. The physical examination should include special reference to blood pressure, breasts, abdomen and pelvic organs, including cervical cytology and relevant laboratory tests. In case of undiagnosed, persistent or recurrent abnormal vaginal bleeding, appropriate measures should be conducted to rule out malignancy.

Because progestational drugs may cause some degree of fluid retention, conditions which might be influenced by this condition, such as epilepsy, migraine, asthma, cardiac or renal dysfunction, require careful observation.

In cases of breakthrough bleeding, as in all cases of irregular bleeding per vaginum, nonfunctional causes should be borne in mind and adequate diagnostic measures undertaken.

Patients who have a history of psychic depression should be carefully observed and the drug discontinued if the depression recurs to a serious degree.

The age of the patient constitutes no absolute limiting factor although treatment with progestin may mask the onset of the climacteric.

Studies of the addition of a progestin product to an estrogen replacement regimen for seven or more days of a cycle of estrogen administration have reported a lowered incidence of endometrial hyperplasia. Morphological and biochemical studies of endometrial suggest that 10–13 days of a progestin are needed to provide maximal maturation of the endometrium and to eliminate any hyperplastic changes. Whether this will provide protection from endometrial carcinoma has not been clearly established.

There are possible risks which may be associated with the inclusion of progestin in estrogen replacement regimen, including adverse effects on carbohydrate and lipid metabolism. The dosage used may be important in minimizing these adverse effects.

A decrease in glucose tolerance has been observed in a small percentage of patients on estrogen-progestin combination treatment. The mechanism of this decrease is obscure. For this reason, diabetic patients should be carefully observed while receiving such therapy.

Monitor patients for hepatic dysfunction periodically and temporarily interrupt DEPO-PROVERA Sterile Aqueous Suspension use if the patient develops hepatic dysfunction. Do not resume use until markers of liver function return to normal.

Studies in pre-menopausal women show that medroxyprogesterone acetate given as 150 mg intramuscularly every three months reduces serum estrogen levels and is associated with loss of bone mineral density (BMD). It is unknown if use of Depo-Provera during adolescence and early adulthood, a critical period of bone accretion, will reduce peak bone mass. An evaluation of BMD may be appropriate in some patients who use higher doses of medroxyprogesterone acetate for long-term treatment of endometrial or renal carcinoma.

10. Effects on the Hypothalmic-Pituitary-Adrenal Axis

The use of DEPO-PROVERA Sterile Aqueous Suspension may, due to its cortisol-like glucocorticoid activity, also produce Cushingoid symptoms such as weight gain, edema/fluid retention, and facial swelling.

The effect of prolonged use of DEPO-PROVERA Sterile Aqueous Suspension at the recommended doses on pituitary, ovarian, adrenal, hepatic, and uterine function is not known.

The use of DEPO-PROVERA Sterile Aqueous Suspension may change the results of some laboratory tests, such as coagulation factors, lipids, glucose tolerance, and binding proteins. [See LABORATORY TEST INTERACTIONS].

When multi-dose vials are used, special care to prevent contamination of the contents is essential. There is some evidence that benzalkonium chloride is not an adequate antiseptic for sterilizing DEPO-PROVERA Sterile Aqueous Suspension multi-dose vials. A povidone-iodine solution or similar product is recommended to cleanse the vial top prior to aspiration of contents. [See WARNINGS].

Long-term intramuscular administration of Medroxyprogesterone acetate (MPA) has been shown to produce mammary tumors in beagle dogs. There is no evidence of a carcinogenic effect associated with the oral administration of MPA to rats and mice. Medroxyprogesterone acetate was not mutagenic in a battery of in vitro or in vivo genetic toxicity assays.

Medroxyprogesterone acetate at high doses is an anti-fertility drug and return to ovulation and fertility may be delayed after stopping treatment.

Safety and efficacy of DEPO- PROVERA for endometrial and renal carcinoma have not been established in pediatric patients.

Studies in pre-menopausal women show that Depo-Provera is associated with loss of BMD. It is unknown if use of Depo-Provera during adolescence and early adulthood, a critical period of bone accretion, will reduce peak bone mass. (See PRECAUTIONS: Decrease in Bone Mineral Density)

Aminoglutethimide administered concomitantly with DEPO-PROVERA Sterile Aqueous Suspension may significantly depress the serum concentrations of medroxyprogesterone acetate. DEPO-PROVERA users should be warned of the possibility of decreased efficacy with the use of this or any related drugs.

The pathologist should be advised of progestin therapy when relevant specimens are submitted. The following laboratory tests may be affected by progestins including DEPO-PROVERA Sterile Aqueous Suspension:

See PRECAUTIONS for possible adverse effects on the fetus

In a few instances there have been undesirable sequelae at the site of injection, such as residual lump, change in color of skin, or sterile abscess.

–
change in weight (increase or decrease)

A statistically significant association has been demonstrated between use of estrogen-pro-gestin combination drugs and pulmonary embolism and cerebral thrombosis and embolism. For this reason patients on progestin therapy should be carefully observed. There is also evidence suggestive of an association with neuro-ocular lesions, e.g. retinal thrombosis and optic neuritis.

The following adverse reactions have been observed in patients receiving estrogen-progestin combination drugs:

The following laboratory results may be altered by the use of estrogen-progestin combination drugs:

When multi-dose vials are used, special care to prevent contamination of the contents is essential [see WARNINGS and PRECAUTIONS].

Doses of 400 mg to 1000 mg of DEPO-PROVERA Sterile Aqueous Suspension per week are recommended initially. If improvement is noted within a few weeks or months and the disease appears stabilized, it may be possible to maintain improvement with as little as 400 mg per month. Medroxyprogesterone acetate is not recommended as primary therapy, but as adjunctive and palliative treatment in advanced inoperable cases including those with recurrent or metastatic disease.

Of the 349 subjects in a clinical study of Depo Provera in renal carcinoma, 30 percent were 65 and over, while 5 percent were 75 and over. No overall differences in safety or effectiveness were observed between these subjects and younger subjects, and other reported clinical experience has not identified differences in responses between the elderly and younger patients, but greater sensitivity of some older individuals cannot be ruled out.

This product has been used primarily in post-menopausal women for the treatment of endometrial carcinoma. Clinical experience has not identified differences in safety or effectiveness between elderly and younger patients.

DEPO-PROVERA Sterile Aqueous Suspension should not be used by women with significant liver disease and should be discontinued if jaundice or disturbances of liver function occur [see PRECAUTIONS].

The effect of renal impairment on DEPO-PROVERA pharmacokinetics has not been studied.