Topotecan Injection is indicated for the treatment of patients with small cell lung cancer (SCLC) with platinum-sensitive disease who progressed at least 60 days after initiation of first-line chemotherapy.

The recommended dosage of Topotecan Injection is 1.5 mg/m2 by intravenous infusion over 30 minutes daily for 5 consecutive days, starting on Day 1 of a 21-day cycle.

Reduce the dose of Topotecan Injection to 1.25 mg/m2/day for:

Reduce the dose of Topotecan Injection to 0.75 mg/m2/day for patients with creatinine clearance (CLcr) of 20 to 39 mL/min (calculated with the Cockcroft-Gault method using ideal body weight) [see Clinical Pharmacology (12.3)].

Withdraw the appropriate volume from the vial and discard any unused portion.

Store diluted Topotecan Injection at 20°C and 25°C (68°F and 77°F) in ambient lighting conditions for no more than 24 hours. Discard unused portion after 24 hours.

Topotecan Injection is contraindicated in patients who have a history of severe hypersensitivity reactions to topotecan. Reactions have included anaphylactoid reactions [see Adverse Reactions (6.2)].

Topotecan can cause severe myelosuppression.

Topotecan can cause fatal typhlitis (neutropenic enterocolitis). Consider the possibility of typhlitis in patients presenting with fever, neutropenia, and abdominal pain.

Administer the first cycle of Topotecan Injection only to patients with a baseline neutrophil count of greater than or equal to 1,500/mm3 and a platelet count greater than or equal to 100,000/mm3. Monitor blood counts frequently during treatment. Withhold and reduce dose of Topotecan Injection based on neutrophil counts, platelet counts and hemoglobin levels [see Dosage and Administration (2.3)].

Extravasation with topotecan has been observed; severe cases have been reported. If signs or symptoms of extravasation occur, immediately stop administration of Topotecan Injection and institute recommended management procedures [see Adverse Reactions (6.2)].

The following serious adverse reactions are described elsewhere in the labeling:

The data in Warnings and Precautions reflect exposure to topotecan from 8 trials in which 879 patients with small cell lung cancer (SCLC) and other solid tumors received topotecan 1.5 mg/m2 by intravenous infusion daily for 5 consecutive days, starting on Day 1 of a 21-day cycle.

The following reactions have been identified during postapproval use of topotecan. Because these reactions are reported voluntarily from a population of unknown size, it is not always possible to reliably estimate their frequency or establish a causal relationship to drug exposure.

Severe bleeding (in association with thrombocytopenia)

8 USE IN SPECIFIC POPULATIONS

Based on animal data and its mechanism of action, Topotecan Injection can cause fetal harm when administered to a pregnant woman. There are no available clinical data on the use of topotecan in pregnancy. Topotecan caused embryolethality, fetotoxicity, and teratogenicity in rats and rabbits when administered during organogenesis at doses similar to the clinical dose (see Data). Advise pregnant women of the potential risk to a fetus.

In the U.S. general population, the background risk of major birth defects is 2% to 4% and of miscarriage is 15% to 20% of clinically recognized pregnancies.

There are no data on the presence of topotecan or its metabolites in human milk or their effects on the breastfed infant or on milk production. Lactating rats excrete high concentrations of topotecan in milk (see Data). Because of the potential for serious adverse reactions in breastfed infants, advise women not to breastfeed during treatment with Topotecan Injection and for 1 week after the last dose.

Following intravenous administration of topotecan to lactating rats at a dose of 4.72 mg/m2 (about twice the 1.5 mg/m2 clinical dose based on BSA), topotecan was excreted into milk at concentrations up to 48-fold higher than those in plasma.

Verify pregnancy status of females of reproductive potential prior to initiating Topotecan Injection [see Use in Specific Populations (8.1)].

Topotecan can cause fetal harm when administered to a pregnant woman [see Use in Specific Populations (8.1)].

Advise female patients of reproductive potential to use effective contraception during treatment with Topotecan Injection and for 6 months after the last dose.

Topotecan may damage spermatozoa, resulting in possible genetic and fetal abnormalities. Advise males with a female partner of reproductive potential to use effective contraception during treatment with Topotecan Injection and for 3 months after the last dose [see Nonclinical Toxicology (13.1)].

Topotecan may have both acute and long-term effects on fertility [see Nonclinical Toxicology (13.1)].

Safety and effectiveness in pediatric patients have not been established.

Of the 879 patients with SCLC or another solid tumor who received topotecan in clinical trials, 32% were aged 65 years and older, while 3.8% were aged 75 years and older. No overall differences in effectiveness or safety were observed between these patients and younger patients and other reported clinical experience has not identified differences in responses between the elderly and younger patients.

Overdoses (up to 10-fold of the recommended dose) have occurred in patients receiving intravenous topotecan. The primary complication of overdosage is myelosuppression. Elevated hepatic enzymes, mucositis, gastrointestinal toxicity and skin toxicity have occurred with overdosages. If an overdose is suspected, monitor the patient closely for myelosuppression and institute supportive-care measures as appropriate. 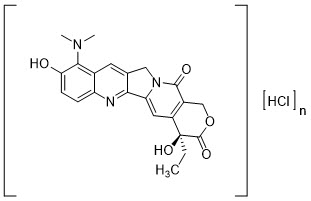 Topotecan Injection for intravenous use is supplied as a sterile, non-pyrogenic, clear, yellow to yellow-green solution in single-dose vial at a topotecan free base concentration of 4 mg/4 mL (1 mg/mL).

Each mL contains 1 mg topotecan free base (equivalent to 1.11 mg of topotecan hydrochloride), 5 mg tartaric acid, NF and water for injection, USP. It may also contain hydrochloric acid and/or sodium hydroxide to adjust the pH. The solution pH ranges from 2.6 to 3.2.

Following administration of topotecan at doses of 0.5 to 1.5 mg/m2 (0.3 to 1 times the recommended dose) administered as a 30-minute infusion, area under the curve (AUC) increases approximately proportional with dose.

Protein binding of topotecan is approximately 35%.

The terminal half-life of topotecan is 2 to 3 hours following intravenous administration.

Topotecan undergoes a reversible pH-dependent hydrolysis of its pharmacologically active lactone moiety. At pH ≤ 4, the lactone is exclusively present, whereas the ring-opened hydroxy-acid form predominates at physiologic pH. Topotecan is metabolized to an N-demethylated metabolite in vitro. The mean metabolite: parent AUC ratio was about 3% for total topotecan and topotecan lactone following intravenous administration.

No clinically significant differences in the pharmacokinetics of topotecan were observed based on age, sex, or hepatic impairment following intravenous administration.

No clinically significant changes in topotecan pharmacokinetics were observed when coadministered cisplatin.

No clinically significant changes in the pharmacokinetics of free platinum were observed in patients coadministered cisplatin with topotecan.

Carcinogenicity testing of topotecan has not been performed. Topotecan is known to be genotoxic to mammalian cells and is a probable carcinogen. Topotecan was mutagenic to L5178Y mouse lymphoma cells and clastogenic to cultured human lymphocytes with and without metabolic activation. It was also clastogenic to mouse bone marrow. Topotecan did not cause mutations in bacterial cells.

Topotecan given to female rats prior to mating at an intravenous dose of 1.4 mg/m2 (about equal to the 1.5 mg/m2 clinical dose based on BSA) caused superovulation possibly related to inhibition of follicular atresia. This dose given to pregnant female rats also caused increased pre-implantation loss. A one month study in dogs given a daily intravenous topotecan dose of 0.4 mg/m2 (about 0.25 times the 1.5 mg/m2 clinical dose based on BSA) suggests that treatment may cause an increase in the incidence of multinucleated spermatogonial giant cells in the testes.

The efficacy of topotecan was studied in 426 patients with recurrent or progressive SCLC in a randomized, comparative trial and in 3 single-arm trials.

In a randomized, comparative trial, 211 patients were randomized 1:1 to received topotecan (1.5 mg/m2 once daily intravenously for 5 days starting on Day 1 of a 21-day cycle) or CAV (cyclophosphamide 1,000 mg/m2, doxorubicin 45 mg/m2, vincristine 2 mg administered sequentially on Day 1 of a 21-day cycle). All patients were considered sensitive to first-line chemotherapy (responders who then subsequently progressed greater than or equal to 60 days after completion of first-line therapy). A total of 77% of patients treated with topotecan and 79% of patients treated with CAV received platinum/etoposide with or without other agents as first-line chemotherapy. The efficacy outcome measures were overall response rate, response duration, time to progression and overall survival (OS).

The results of the trial did not show statistically significant improvements in response rates, response duration, time to progression, and OS as shown in Table 2.

Changes on a disease-related symptom scale are presented in Table 3. It should be noted that not all patients had all symptoms, nor did all patients respond to all questions. Each symptom was rated on a 4-category scale with an improvement defined as a change in 1 category from baseline sustained over 2 cycles. Limitations in interpretation of the rating scale and responses preclude formal statistical analysis.

Topotecan was also studied in 3 open-label, non-comparative trials (Studies 014, 092 and 053) in a total of 319 patients with recurrent or progressive SCLC after treatment with first-line chemotherapy. In all 3 trials, patients were stratified as either sensitive (responders who then subsequently progressed greater than or equal to 90 days after completion of first-line therapy) or refractory (no response to first-line chemotherapy or who responded to first-line therapy and then progressed within 90 days of completing first-line therapy). Response rates ranged from 11% to 31% for sensitive patients and 2% to 7% for refractory patients. Median time to progression and median survival were similar in all 3 trials and the comparative trial.

16 HOW SUPPLIED/STORAGE AND HANDLING

Store refrigerated between 2°C and 8°C (36°F and 46°F) in the original carton to protect from light. Discard unused portion.

Advise females of reproductive potential to use effective contraception during treatment with Topotecan Injection and for 6 months after the last dose [see Use in Specific Populations (8.1, 8.3)].

Advise males with a female sexual partner of reproductive potential to use effective contraception during treatment with Topotecan Injection and for 3 months after the last dose [see Use in Specific Populations (8.1, 8.3), Nonclinical Toxicology (13.1)].

Advise women to discontinue breastfeeding during treatment with Topotecan Injection and for at least 1 week after the last dose [see Use in Specific Populations (8.2)].

Advise male and female patients of the potential risk for impaired fertility [see Use in Specific Populations (8.3), Nonclinical Toxicology (13.1)].

Advise patients that topotecan may cause asthenia or fatigue. These symptoms may impair the ability to safely drive or operate machinery.