Hydrocortisone acetate is the acetate ester of hydrocortisone, an anti-inflammatory hormone. Its chemical name is 21-(acetyloxy)- 11β,17-dihydroxypregn-4-ene-3,20-dione. Its structural formula is: 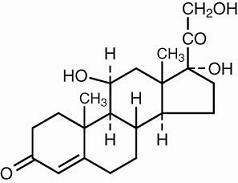 The base is a smooth vanishing cream with a pH of approximately 5.0.

The anti-infective components in the combination are included to provide action against specific organisms susceptible to them. Polymyxin B sulfate and neomycin sulfate together are considered active against the following microorganisms: Staphylococcus aureus, Escherichia coli, Haemophilus influenzae, Klebsiella- Enterobacter species, Neisseria species, and Pseudomonas aeruginosa. The product does not provide adequate coverage against Serratia marcescens and streptococci, including Streptococcus pneumoniae.

The acid pH helps restore normal cutaneous acidity. Owing to its excellent spreading and penetrating properties, the cream facilitates treatment of hairy and intertriginous areas. It may also be of value in selective cases where the lesions are moist.

For the treatment of corticosteroid-responsive dermatoses with secondary infection. It has not been demonstrated that this steroid-antibiotic combination provides greater benefit than the steroid component alone after 7 days of treatment (see WARNINGS).

Because of the concern of nephrotoxicity and ototoxicity associated with neomycin, this combination should not be used over a wide area or for extended periods of time.

As with any antibacterial preparation, prolonged use may result in overgrowth of nonsusceptible organisms, including fungi. Appropriate measures should be taken if this occurs. Use of steroids on infected areas should be supervised with care as anti-inflammatory steroids may encourage spread of infection. If this occurs, steroid therapy should be stopped and appropriate anti-bacterial drugs used. Generalized dermatological conditions may require systemic corticosteroid therapy.

Specifically, sufficient percutaneous absorption of hydrocortisone can occur in pediatric patients during prolonged use to cause cessation of growth, as well as other systemic signs and symptoms of hyperadrenocorticism.

If redness, irritation, swelling or pain persists or increases, discontinue use and notify physician. Do not use in the eyes.

Hydrocortisone acetate appears in human milk following oral administration of the drug. Since systemic absorption of hydrocortisone may occur when applied topically, caution should be exercised when CORTISPORIN Cream is used by a nursing woman.

Clinical studies of Cortisporin Cream did not include sufficient numbers of subjects aged 65 and over to determine whether they respond differently from younger subjects. Other reported clinical experience has not identified differences in responses between the elderly and younger patients. In general, dose selection for an elderly patient should be cautious, usually starting at the low end of the dosing range, reflecting the greater frequency of decreased hepatic, renal, or cardiac function, and of concomitant disease or other drug therapy.

Safety and effectiveness in pediatric patients have not been established (see PRECAUTIONS: General).

Neomycin occasionally causes skin sensitization. Ototoxicity and nephrotoxicity have also been reported (see WARNINGS). Adverse reactions have occurred with topical use of antibiotic combinations including neomycin and polymyxin B. Exact incidence figures are not available since no denominator of treated patients is available. The reaction occurring most often is allergic sensitization. In one clinical study, using a 20% neomycin patch, neomycin-induced allergic skin reactions occurred in two of 2,175 (0.09%) individuals in the general population.1 In another study, the incidence was found to be approximately 1%.2

A small quantity of the cream should be applied 2 to 4 times daily, as required. The cream should, if conditions permit, be gently rubbed into the affected areas.