Bacitracin zinc is the zinc salt of bacitracin, a mixture of related cyclic polypeptides (mainly bacitracin A) produced by the growth of an organism of the licheniformis group of Bacillus subtilis (Fam. Bacillaceae). It has a potency of not less than 40 bacitracin units per mg. The structural formula is:

Hydrocortisone, 11β,17,21-trihydroxypregn-4-ene-3, 20-dione, is an anti-inflammatory hormone. Its structural formula is: 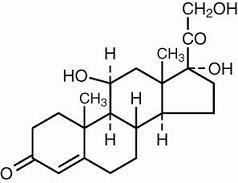 The anti-infective components in the combination are included to provide action against specific organisms susceptible to them. Polymyxin B sulfate, bacitracin zinc, and neomycin sulfate together are considered active against the following microorganisms: Staphylococcus aureus, streptococci, including Streptococcus pneumoniae, Escherichia coli, Haemophilus influenzae, Klebsiella-Enterobacter species, Neisseria species, and Pseudomonas aeruginosa.

The product does not provide adequate coverage against Serratia marcescens.

For the treatment of corticosteroid-responsive dermatoses with secondary infection. It has not been demonstrated that this steroid-antibiotic combination provides greater benefit than the steroid component alone after 7 days of treatment. (See WARNINGS.)

Neomycin can induce permanent sensorineural hearing loss due to cochlear damage, mainly destruction of hair cells in the organ of Corti. The risk of ototoxicity is greater with prolonged use.

Therapy with this product should be limited to 7 days of treatment. (See INDICATIONS AND USAGE.)

Neomycin sulfate may cause cutaneous sensitization. A precise incidence of hypersensitivity reactions (primarily skin rash) due to topical neomycin is not known. Discontinue promptly if sensitization or irritation occurs.

When using neomycin-containing products to control secondary infection in the chronic dermatoses, such as chronic otitis extema or stasis dermatitis, it should be borne in mind that the skin in these conditions is more liable than is normal skin to become sensitized to many substances, including neomycin. The manifestation of sensitization to neomycin is usually a low-grade reddening with swelling, dry scaling, and itching; it may be manifest simply as a failure to heal. Periodic examination for such signs is advisable, and the patient should be told to discontinue the product if they are observed. These symptoms regress quickly on withdrawing the medication. Neomycin-containing applications should be avoided for the patient thereafter.

As with other antibiotic preparations, prolonged use may result in overgrowth of nonsusceptible organisms, including fungi. Treatment should not be continued for longer than 7 days. If the infection is not improved after 1 week, cultures and susceptibility tests should be repeated to verify the identity of the organism and to determine whether therapy should be changed. Allergic cross-reactions may occur which could prevent the use of any or all of the aminoglycoside antibiotics for the treatment of future infections.

Use of steroids on infected areas should be supervised with care as anti-inflammatory steroids may encourage spread of infections. If this occurs, steroid therapy should be stopped and appropriate antibacterial drugs used. Generalized dermatological conditions may require systemic corticosteroid therapy.

If redness, irritation, swelling, or pain persists or increases, discontinue use and notify physician. Do not use in the eyes.

Hydrocortisone appears in human milk following oral administration of the drug. Since systemic absorption of hydrocortisone may occur when applied topically, caution should be exercised when CORTISPORIN Ointment is used by a nursing woman.

Safety and effectiveness in pediatric patients have not been established. Sufficient percutaneous absorption of hydrocortisone can occur in infants and children during prolonged use to cause cessation of growth, as well as other signs and symptoms of hyperadrenocorticism.

Clinical studies of Cortisporin Ointment did not include sufficient numbers of subjects aged 65 and over to determine whether they respond differently from younger subjects. Other reported clinical experience has not identified differences in responses between elderly and younger patients.

Neomycin occasionally causes skin sensitization. Ototoxicity and nephrotoxicity have also been reported. (See WARNINGS.) Adverse reactions have occurred with topical use of antibiotic combinations including neomycin, bacitracin, and polymyxin B. Exact incidence figures are not available since no denominator of treated patients is available. The reaction occurring most often is allergic sensitization. In one clinical study, using a 20% neomycin patch, neomycin-induced allergic skin reactions occurred in two of 2,175 (0.09%) individuals in the general population.1 In another study, the incidence was found to be approximately 1%.2

Therapy with this product should be limited to 7 days. A thin film is applied 2 to 4 times daily to the affected area.