Spectinomycin hydrochloride is isolated as a white to pale buff crystalline dihydrochloride pentahydrate powder, molecular weight 495, and is stable in the dry state for 36 months.

Spectinomycin hydrochloride is an inhibitor of protein synthesis in the bacterial cell; the site of action is the 30S ribosomal subunit.

Definitive in vitro studies have shown no cross-resistance of N. gonorrhoeae between spectinomycin hydrochloride and penicillin. The antibiotic is not significantly bound to plasma protein.

To reduce the development of drug-resistant bacteria and maintain the effectiveness of TROBICIN Sterile Powder and other antibacterial drugs, TROBICIN Sterile Powder should be used only to treat or prevent infections that are proven or strongly suspected to be caused by susceptible bacteria. When culture and susceptibility information are available, they should be considered in selecting or modifying antibacterial therapy. In the absence of such data, local epidemiology and susceptibility patterns may contribute to the empiric selection of therapy.

The use of TROBICIN Sterile Powder is contraindicated in patients previously found hypersensitive to it.

Spectinomycin hydrochloride is not effective in the treatment of syphilis. Antibiotics used in high doses for short periods of time to treat gonorrhea may mask or delay the symptoms of incubating syphilis. Since the treatment of syphilis demands prolonged therapy with any effective antibiotic, patients being treated for gonorrhea should be closely observed clinically. All patients with gonorrhea should have a serologic test for syphilis at the time of diagnosis. Patients treated with spectinomycin hydrochloride should have a follow-up serologic test for syphilis after three months.

The usual precautions should be observed with atopic individuals.

The clinical effectiveness of TROBICIN Sterile Powder should be monitored to detect evidence of development of resistance by Neisseria gonorrhoeae.

Prescribing TROBICIN Sterile Powder in the absence of a proven or strongly suspected bacterial infection or a prophylactic indication is unlikely to provide benefit to the patient and increases the risk of the development of drug-resistant bacteria.

Genotoxicity of spectinomycin hydrochloride was evaluated in six assay test systems including two Ames tests, two micronucleus tests in mice, unscheduled DNA synthesis in rat primary hepatocytes, and a chromosomal aberration test in Chinese hamster ovary cells. Spectinomycin was not shown to be mutagenic or genotoxic in these tests.

Safety and effectiveness in the pediatric population have not been established. (See WARNINGS.)

The following reactions were observed during the single dose clinical trials: soreness at the injection site, urticaria, dizziness, nausea, chills, fever and insomnia.

A few cases of anaphylaxis or anaphylactoid reactions have been reported. If serious allergic reactions occur, the usual agents (epinephrine, corticosteroids, and/or antihistamines) should be available for emergency use. In cases of severe anaphylaxis, airway support and oxygen may also be required.

Information on overdosage in humans is not available. Hemodialysis has been reported to aid in the removal of intravenously administered spectinomycin from the body.

Preparation of Drug for Intramuscular Injection

Shake vials vigorously immediately after adding Sterile Water for Injection, USP and before withdrawing dose. It is recommended that disposable syringes and needles be used. A 20-gauge needle is recommended.

Intramuscular injections should be made deep into the upper outer quadrant of the gluteal muscle.

Adults (Men and Women)—Inject 5 mL intramuscularly for a 2-gram dose. This is also the recommended dose for patients being treated after failure of previous antibiotic therapy.

In geographic areas where antibiotic resistance is known to be prevalent, initial treatment with 4 grams (10 mL) intramuscularly is preferred. The 10-mL injection may be divided between two gluteal injection sites.

TROBICIN Sterile Powder is available as:

TROBICIN Sterile Powder, 2-gram vial NDC 0069-8558-22. When reconstituted with 3.2 mL of Sterile Water for Injection, USP , each vial yields a sufficient quantity for withdrawal of 5 mL of a suspension containing 400 mg spectinomycin per mL (as the hydrochloride). Five mL provides 2 grams spectinomycin. For intramuscular use only. 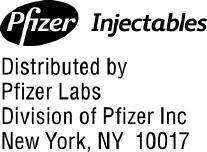